[“One day at work, I got a call from Dawayne who was living in Wichita, Kansas. He had heard that I was working at the Sound Warehouse and told me he was a big Mothers fan. He was getting ready to pass through Albuquerque on his way to L.A. and very politely asked would it be possible to stop by and have his record collection signed.” From For Mother’s Sake, 1980]

He cheerfully agreed to do it and asked me why I was moving to LA. He also told me that he’d lived in Wichita for several years, right before he moved to LA and ended up working with Zappa. I not only told Jimmy that I was a musician/songwriter, but I was also part Cherokee, so we had a few things in common from the start. 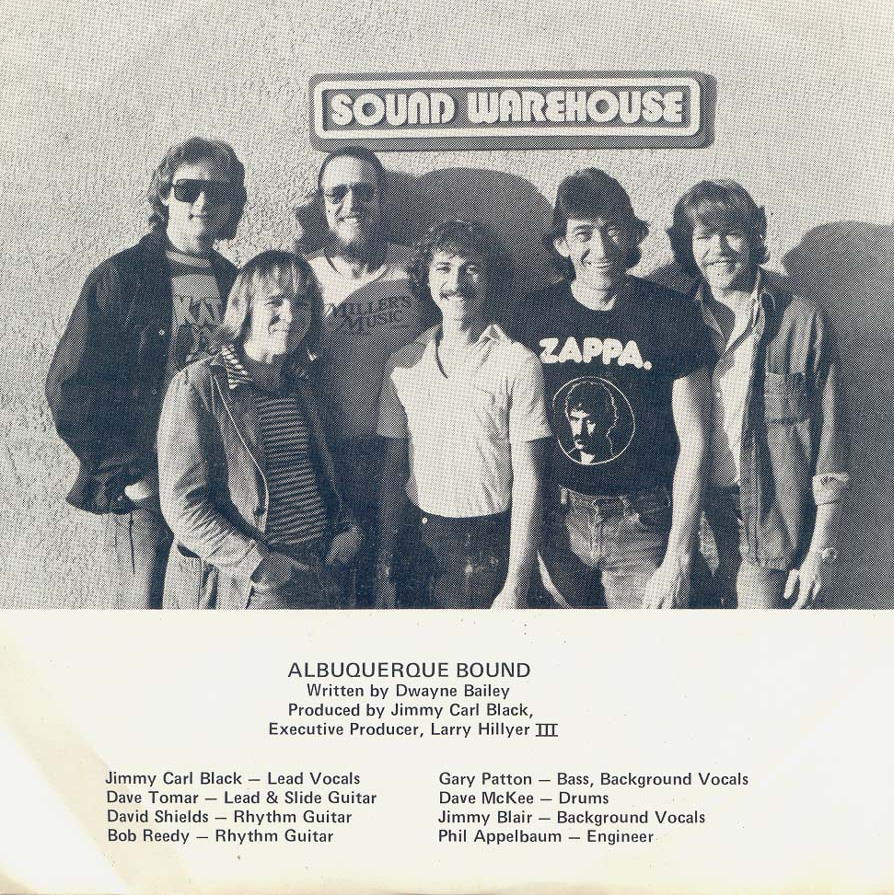 Not only did Jimmy agree to sign my albums, he asked me if I’d be interested in writing some music for some possible future projects he was working on. Well needless to say, I calmly freaked and told him I would write something for him on my way to see him. He had told me how he had grown sick of living in LA and had moved to Albuquerque, so that was exactly what I wrote about. I called the song ‘Albuquerque Bound’. I literally scribbled the lyrics down while I was driving this big yellow Ryder moving truck, with my wife, daughter and dog sitting next to me – I still have that piece of paper – it’s very hard to read!

When we got to town I called Jimmy and he came over to our motel. I played him the song, he told me he loved it and that he would like to use it as one side of a 45 rpm single he was gonna be recording. Once again I was calmly freaking, my little farm-raised wife was watching all this taking place, wondering who in the world she was married to! It was an absolute dream come true and that’s how I first met Jimmy Carl Black.

While the Grandmothers were in LA rehearsing for their first tour, we were all sitting and hanging at a house somewhere up in Hollywood. The fact that Jimmy was so generous and treated me like a brother always blew me away and showed me what a genuine and warm guy he was. He had just been to Zappa’s house, where Frank had just written a song for him called ‘’Falling In Love Is A Stupid Habit’. I got to hang with Jimmy and the band for several weeks that year, but I never actually saw him again. I went off and started playing with Bob Seeger and later with the band Chicago. We always kept in touch through phone, mail and more recently the computer. He’d send me his lyrics and I’d write and record a demo and send it back. Once he gave his blessing, he either recorded it with his band or in some cases I recorded them. [Dawayne Bailey]